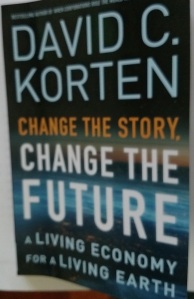 Public intellectual and Yes! Magazine co-founder David Korten as built his reputation on tomes reaching 400 pages or more such as When Corporations Rule the World and The Great Turning: From Empire to Earth Community. His latest, Change the Story, Change the Future: A Living Economy for a Living Earth, clocks in at a mere 169 pages, but he has filled them with big ideas. Prepared as a “Report to the Club of Rome,” it builds on both his work, especially in The Great Turning, and the Club’s famed The Limits to Growth from 1972.

As such Change the Story, Change the Future provides a handy summary of Korten’s life, work, and thought. Extending the theme from The Great Turning on how narrative shapes society, he asserts that communities of all sizes and types are held together by “shared cultural stories” that frame and give meaning and purpose to our lives. From there he posits that when we get those stories wrong, we get our future wrong.

Korten identifies as the most destructive story what he calls the “Sacred Money and Markets story.” He leaps into the attack on page one:

We are in terminal crisis because we have our defining story badly wrong. Seduced by a fabricated Sacred Money and Markets story, we live in indentured servitude to money-seeking corporate robots and relate to Earth as if it were a dead rock for sale.

He believes that people have lost faith in the Sacred Money and Markets story, but lack a new, authentic framing story to replace it. In its stead, Korten offers “an authentic Sacred Life and Living Earth story.” That frame, Korten claims, will produce a Living Economy and a “radical living democracy” that balance mankind and nature to sustain the Earth, offers a meaningful livelihood to all with “an equitable sharing of wealth,” and gives a voice to all in decisions that affect their lives. He asserts that millions are involved in parts of this new vision, lacking only the overarching story to bring them together and to shape their communications approach. This shared articulation proves essential because of the pervasive and often subtle domination of the Sacred Money and Markets story, exemplified by news outlets treating the Dow and S&P as if those stock indices were the economy.

Change the Story, Change the Future has such powerful implications for localism that it earns a chapter:

The biosphere self-organizes as a global system. The locus of intelligent agency, however, is everywhere local and involves trillions of individual choice makers – none of whom is in a position to dominate the rest…. The consequences of local choice making ripple outward and upward to create global dynamics that ripple back to shape local conditions to which the local economy in turn adapts…. So long as the local is in balance, so is the global.

Korten also claims that “corporate robots” in a world of automated securities trading and multinational corporate expanse have taken control away from board and CEO’s in an insatiable quest for profits, often only on paper. From the divine right of kings we have moved to the divine right of money. Agreements like NAFTA and TPP accelerate this destructive process in a suicidal economic system. “The goal is not to tame them. It is to eliminate them and replace them with institutions accountable to deeply democratic Living Earth communities.”

The living economy Korten envisions will “root power in local households and communities” and “foster local diversity and self-reliance.”

The leadership, learning, and decision making for this work are – and must be – in the hands of local people motivated by a concern for the health, resilience, and sustained well-being of the communities in which they live…. They build communities of place that reduce dependence on money, increase local self-control and self-determination, and advance democracy as a way of life.

Thus Korten connects localism to globalism as parts of a living ecosystem in which we all have a role in “a movement of movements.” He concludes Change the Story, Change the Future with a couple of pages of individual responsibilities and actions that can bring about these changes to a sustainable Living Economy on a Living Earth. They all build on the foundation of creating a new framing story that puts us on a path to valuing life more than money.

Change the Story, Change the Future is a short, powerful, and easy to grasp volume that provides a challenging framework for saving the Earth one person and one community at a time.